Also called "Stefilia's Stone", is a rare blue variety of the silicate mineral pectolite found only in the Dominican Republic, in the Caribbean. Its coloration varies from white, light-blue, green-blue to deep blue. larimar is a slightly soft stone with a hardness of 4.5 to 5 on the Mohs scale, approximately the same as apatite, sphene and turquoise. Larimar has a vitreous to silky luster. Quality grading of Larimar is according to color; white is low quality and volcanic blue is the highest quality.

The Dominican Republic's Ministry of Mining records show that Father Miguel Domingo Fuertes Loren of the Barahona Parish requested permission on 23 November 1916 to explore and exploit the mine of a certain blue rock that he had discovered. Pectolites were not yet known in the Dominican Republic, and the request was rejected. 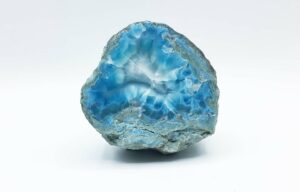 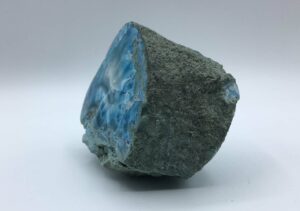 Miguel Méndez and Peace Corps volunteer Norman Rilling rediscovered Larimar in 1974 on a beach at the foot of the Bahoruco Mountain Range, the coastal province of Barahona. Natives believed that the stone came from the sea, and they called the gem Blue Stone. Miguel took his young daughter's name Larissa and the Spanish word for sea (mar) and formed Larimar, to suggest the colors of the Caribbean Sea where it was found. The few stones that they found were alluvial sediment, washed into the sea by the Bahoruco River. An upstream search revealed the in situ outcrops in the range and soon the Los Chupaderos mine was formed.

Larimar is a type of pectolite or a rock composed largely of pectolite, an acid silicate hydrate of calcium and sodium. Pectolite is found in many locations, but larimar has a unique volcanic blue coloration, which is the result of copper substitution for calcium.
Miocene volcanic rocks, andesites and basalts, erupted within the limestones of the south coast of the island. These rocks contained cavities or vugs which were later filled with a variety of minerals, including the blue pectolite. These pectolite cavity fillings are a secondary occurrence within the volcanic flows, dikes, and plugs. When these rocks erode, the pectolite fillings are carried down the slope to end up in the alluvium and the beach gravels. The Bahoruco River carried the pectolite-bearing sediments to the sea. The tumbling action along the streambed provided the natural polishing to the blue larimar, which makes them stand out in contrast to the dark gravels of the streambed.

Color - With most if not all semi-precious gemstones the color is the most important factor of the stone. Larimar is no different, we start by grading the color that is most valuable. The chart will show the grades of different color larimar, keep in mind that there are many different shades and tones that are not shown in this chart. The chart will give you an understanding of what the industry uses to buy Larimar. When grading Larimar you must know what you are grading. For sample, grading Cabochons and beads is different from grading slices and raw material.

AAA1 Volcano Blue, this color is extremely rare and out of all larimar mined it is estimated that less than 1% is volcano blue.

AAA2 Extreme Blue, It is also very rare and is estimated of all the larimar 5% mined is Extreme Blue.

AAA Sky Blue, the most popular color in the industry. Very difficult to find but is not near as rare as the AAA1 and AAA2. Sky Blue is the most sought color for fine jewelry and collectors alike.

AA Blue, the most sold Larimar in the industry. Most suppliers clarify this larimar as AAA. The reason is, the AAA quality larimar have pre set buyers and is held for the most powerful buyers of larimar. Which includes the high end jewelers and the China and Japanese markets.

A Light Blue, Out of all the blues, this is consider the lower quality color Blue
Larimar. This color is the most common color found in the mine of Bahoruco.
This color is what you will find in the local shop all around the Island.

B White Larimar, is white Pectolite very common in small pieces or found in
the center core of the Laimar. This White Larimar is not sough out in the
industry. Although Pectolite is common throughout the world, its rare in gem
quality specially if is semi or fully transparent.

G Green Larimar Just like Blue larimar comes in various shades of green. Although the market is not very fond of green Larimar it could fetch a premium price if the stone is mix with deep blues and it has a sharp and deep color. Most common green larimar is a pale light greyish-green color.

R Red Larimar is red Pectolite with a higher concentration of copper. The red Larimar is not quite popular due to its inconsistent color. Like every other color the bright red has a higher premium than the dull and most common pale red color.

BLK Black Larimar is Actually Pretofied Palm. It comes out with in and surrounding parts of the vain where Larimar is found The Locals call it "carbon"

Purity Grade - Purity grade is the second phase of the larimar grading chart. When we considered purity we are referring to any substance or stain that is foreign to the stone. For sample the Larimar could be a AA blue and have a spot or spots in some part of the stone, this could be a grey, brown or any other color that takes away from the larimar piece. Purity grade is mostly use when grading cabochons or beads. When buying slices of Larimar you must take into consideration of the size of the slice in comparison to the size of the foreign substance.

Image 1 shows the face of the Larimar Cabochon with aproximately 10% of foreign subtance. Image 2 has supperd AAA2 color with an approximate 5% substance on it. Image 3 shows both front and back, the back has a large amount of substance and the front is 100% clear.

Fakes and Imposters
The mines are really difficult to access and the area may be closed off 5 months of the year due to the torrential rains & hurricane season making it very unsafe to dig. There are dealers ON eBay that sell larimar quarts, this are imposters. Although they might look similar these type quarts are died to look like larimar. Also lab created larimar has surfaced in the past few years through China, fortunately for us they have not come close to looking like the real Larimar.