Amber Is Making A Comeback

Take a look at our extensive collection.

Amber International provides only the finest amber and larimar products. Our company isn’t just known for our top-notch items. We are also recognized for our friendly, prompt, and transparent service.

Browse through our products, and fall in love with the beauty of amber and larimar even more. We sell our items worldwide. 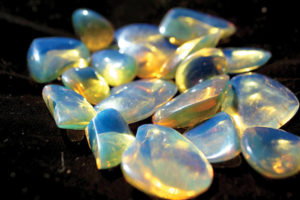 Devoted jewelry lovers are always on the lookout for the unexpected gemstone that shows them as a knowledgeable collector. But it has to resonate with the individual and also be a good fit for their personal style. As any jeweler knows, rarity is not enough when it comes to offering a new gem variety to a consumer. If it’s not attractive it’s missed the point.

That’s why I’m focusing on blue amber lately. Most collectors are already somewhat knowledgeable about the honey colored variety of amber. It’s an organic material unlike mineral gemstones that develop underground over millennia.

The amber we’re most familiar with is a fossilized tree resin. Therefore, the highly-prized specimens are those with part of its prehistoric history embedded within the solidified substance. Examples with insects and plant life are not only captivating to a viewer but are of scientific significance as well, since they have perfectly preserved ancient objects in their living state.

The gem quality stuff is generally recovered from the Baltic Sea region, but is known to appear in places as diverse as Myanmar, Germany, Sicily and elsewhere. Certain geological conditions have to be in place for amber to have been produced.

This brings us to the what and whereabouts of blue amber which is gaining in popularity as public awareness broadens. It is somewhat rare, very beautiful and has a compelling story. Check, check and check. Let’s look at it a bit more. You may decide your clientele will also love this alluring gemstone.

Where to find it

Blue amber is found primarily in the Dominican Republic and parts of Indonesia. And while it’s becoming more widely known today, it has actually been mined since the mid -20th century. Its green-blue hue is actually a form of fluorescence covering over the golden amber as we know it. This fluorescence is stimulated by UV (ultraviolet) lights causing it to give the impression of a blue to green appearance.  According to GIA (Gemological Institute of America) the greenish blue hue of material found in both Dominican Republic and Indonesia is confined to the surface of the material.  The blue body color modifies according to the thickness of the piece, GIA reports.

Studies point to the idea that these resinites were formed in a single sedimentary basin during the Early Miocene through the Middle Miocene age which places its formation approximately 15-20 million years ago. Material found in the Dominican Republic is most often located on the eastern Atlantic Ocean side of that island nation. Dominican’s blue amber comes from Hymenea protera tree resin as opposed to Pinus succinifera trees which produce Baltic amber. It is believed that a lot of the resin that formed the blue amber variety was produced during forest fires caused by lightning.

Because there is limited availability, this material and its story is sure to intrigue your customers who choose distinctive jewelry that is unique from that of their friends. According to online vendor Blue Amber, the harvesting season is restricted due to the climate or by periods when the mines are closed. As with most limited quantity gems, blue amber is often polished en cabochon, or offered as nuggets to retain the largest sizes possible.

As with other limited supply gemstones like tanzanite for example, purveyors of blue amber have established a quality grading system. Blue Amber says their grading runs along color, purity, and size; and these quality components contribute to its ranking from AAA (the best) to AA, then A for the lowest grade on their scale.  Some artisan jewelers note that the Dominican goods are found to have greater transparency than their golden colored varieties.

All these traits make for some appealing choices to serve up to your clientele. Found in larger sizes and free form artistic shapes at relatively modest prices, blue amber is ideal for the creative jeweler who wants to be known as providing original jewels to a discerning clientele. Rich with stories, it won’t take long to hook your customer on its history and exclusivity.