Amber is fossilized tree resin used for jewelry, decoration, medicine, and perfume. Specimens with inclusions of insects and plants are of great scientific significance and highly esteemed by collectors. Amber is usually yellow to brown, and some specimens display red to brownish red or reddish brown colors. Blue amber is rare, found mainly in the Dominican Republic with some production from Indonesia and Mexico. This variety comes from the resin of the extinct tree species Hymenaea protera (Iturralde-Vinent and MacPhee, 1996; Poinar and Poinar, 1999). According to Iturralde-Vinent and MacPhee (1996), most Dominican amber occurs in two zones: north of Santiago de los Caballeros (the “northern area”) and northeast of Santo Domingo (the “eastern area”).

Although resinites of different ages exist, available biostratigraphic and paleogeographic data suggest that the main amber deposits in the Dominican Republic (including those famous for yielding biological inclusions) were formed in a single sedimentary basin during the late Early Miocene through early Middle Miocene (15 to 20 million years ago). There is little evidence of extensive reworking or redeposition of the ambers. Before the studies of Iturralde-Vinent and MacPhee (1996), amber from the northern area was thought to have formed during the Early Eocene to Early Miocene epochs (Baroni-Urbani and Saunders, 1982; Lambert et al., 1985; Poinar and Cannatella, 1987; Grimaldi, 1996), while published estimates for the eastern area ranged from the Cretaceous to Holocene epochs (Burleigh and Whalley, 1983; Poinar and Cannatella, 1987; Grimaldi, 1996).

Bellani et al. (2005) studied blue amber from the Dominican Republic and identified the aromatic hydrocarbon component perylene as the source of the UV-stimulated fluorescence emission in the visible wavelength range from 430 to 530 nm, resulting in the observed greenish blue color. They also described the blue color as iridescence under natural daylight or daylight-equivalent lighting.

Iridescence is an optical phenomenon in which a surface appears to shift color as the viewing angle or angle of illumination changes (Nassau, 1983). Although most iridescence is caused by interference, Liu et al. (1999b) found that in pearls and shells it results from diffraction. Each layer of shell and pearl is optically heterogeneous. Light is strongly diffused as it passes through the layers, causing the milky white color observed. The diffused light cannot produce interference to cause the iridescence color. For this to happen, each layer would have to be optically uniform and have a thickness on the order of visible-light wavelengths.

The phenomenon by which bodycolor varies with a gemstone’s thickness is called the Usambara effect. Liu et al. (1999a) determined that this color variation is caused by the hue angle change corresponding with the path length of light through a gem material.

This article presents the color phenomena of blue amber from the Dominican Republic and Indonesia. Fluorescence and photoluminescence were measured at room temperature to show the characteristic features. As a result, we found that the amber’s greenish blue color is only superficial. By calculating the colorimetric data at different depths within a sample, we determined that the hue angle changed with depth, an indication of the Usambara effect in blue amber.

In the northern area, the upper 300 meters of the La Toca Formation of 1,200-meter-thick clastic rocks contains the amber-bearing unit, composed of sandstone with occasional conglomerate that accumulated in a deltaic to deep-water environment. Amber fragments in this deposit, which measure up to 40 cm in length, show few surface signs of transportation. Lignite occurs in the form of thin lamellae within the sandstones. These clastic rocks grade into flyschoid, with deeper-water deposits containing detrital amber. 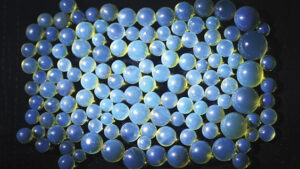 Figure 1. These blue amber beads from the Dominican Republic, 6.0–12 mm in diameter, are shown under daylight-equivalent flashlight. Their greenish blue color is evenly distributed. Photo by Guanghai Shi.

In the eastern area, the amber-bearing sediments in the approximately 100 m thick Yanigua Formation are composed of organically rich laminated sand, sandy clay, and some intercalated lignite layers up to 1.5 m thick. Amber pieces occur in the lignite and the sandy clay. In addition to indicative sedimentary features, the characteristics of the invertebrate and vertebrate fossils from these beds—crocodiles, sirenians, and turtles—imply that deposition occurred in a near-shore context, probably in coastal lagoons fronting low, densely forested hills (Brouwer and Brouwer, 1982).

Two blue amber samples were studied. Sample 1, a cabochon from the Dominican Republic, appeared to have a greenish blue surface color and a yellow bodycolor (figure 4). Sample 2, a rough Indonesian amber with one surface polished, showed blue color on the polished surface and a red bodycolor (figure 5). Both samples showed very strong greenish blue fluorescence under long-wave UV radiation at 365 nm, and weak fluorescence under short-wave UV at 254 nm. Both also showed greenish blue phosphorescence that lasted several seconds. 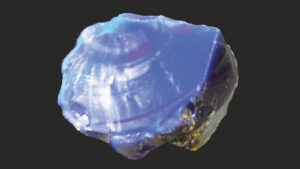 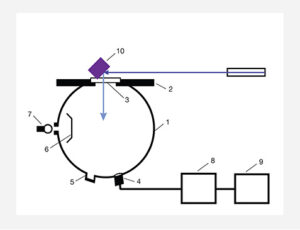 Figure 4 shows the optical arrangement for measuring spectral transmittance using the multifunction spectrometer with a xenon-filled tungsten lamp at the top of the integrating sphere. We placed an unpolished area chipped from sample 2 that was about 1 mm thick on the measurement stage, where the diameter of the aperture was 3 mm. The light from the lamp at the top of the measurement integrating sphere passed through both the slice and the aperture, into the measurement integrating sphere. The collimator collected the transmitted light from the amber slice and sent it to the spectrometer for measurement. To measure the percentage of spectral transmittance, the spectrometer is calibrated to 100% without the sample on the stage, and to 0% by turning off the tungsten lamp. 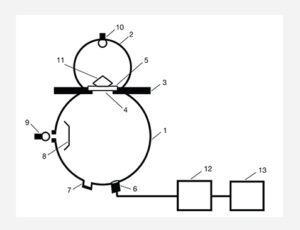 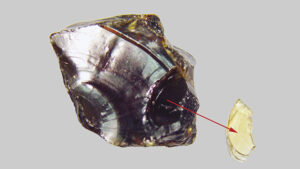 Figure 5. This slice, taken from sample 2, is 1 mm thick at the center. This piece was used for measuring the spectral transmittance of blue amber. Photo by Yan Liu 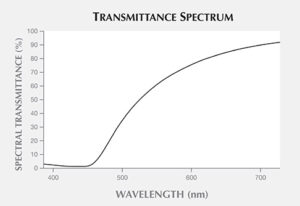 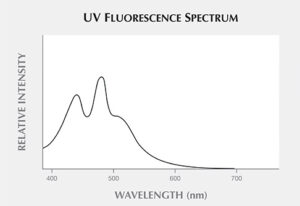 With increasing depth below the surface, the cutoff wavelength shifts to a long wavelength, and the greenish blue fluorescence is eventually totally absorbed. As this depth is still very shallow, the fluorescent light penetration is confined near the surface, limiting the ability to change bodycolor. 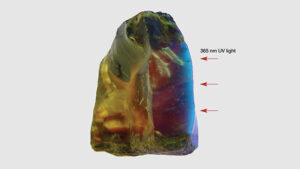 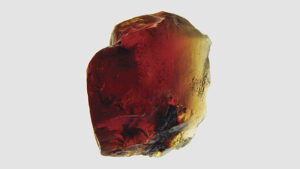 Figure 8. The bodycolor of sample 2 changes from yellow to orangy red where the stone is thicker. Photo by Yan Liu

TABLE 1. Calculated relationship between thickness and hue angle and chroma of a blue amber sample.

Figure 9 shows the hue angle change of the blue amber in the CIELAB color space under the CIE standard illuminant A at 2856 K. The locus of these hue angles is a closed curve, with a hue angle variation of more than 20° in CIELAB color space. This locus is typical of the Usambara effect, which describes color variation with material thickness. In fact, many red and reddish brown ambers we have observed, with or without the blue fluorescence, clearly displayed the Usambara effect. As sample thickness increased, their bodycolor went from yellow to brownish orange or orangy brown, brownish red, or even red. 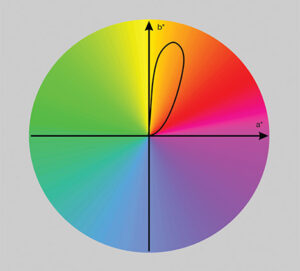 Figure 9. In CIELAB color space, the hue angle locus of sample 2 shows a variation of
more than 20°, attributable to the Usambara effect.

Blue amber’s bodycolor changes with increasing thickness: yellow in areas less than 3 mm thick, orangy yellow to yellowish orange at approximately 3–6 mm, orange at 6–8 mm, and reddish orange and orangy red where the stone is more than 8 mm thick.