Long ago in the Cretaceous period, this shell belonged to a type of marine mollusk called an ammonite. Somehow, the sea creature’s shell ended up entombed in tree resin, which fossilized into an exceptionally rare lump of amber.

In what may be a first of its kind, a lump of amber has preserved the shell of an ammonite and other shoreline life in stunning detail.

Ninety-nine million years ago in what’s now Myanmar, a glob of tree resin oozed onto a beach. Today, the resulting fossilized lump of amber is giving scientists an astonishing glimpse into life on a Cretaceous coastline.

In a study published Monday in the journal PNAS, researchers led by Chinese paleontologist Tingting Yu reveal what is likely the first known record of an ammonite found in amber. These extinct marine mollusks were ancient relatives of octopuses and squid, and they didn’t venture on land. Finding an ammonite shell in a land-formed fossil is therefore as eyebrow-raising as finding dinosaur remains on the bottom of an ancient seafloor.

“Amber—ancient resins from trees—commonly traps only some terrestrial insects, plants, or animals,” says study coauthor Bo Wang, a paleontologist at the Nanjing Institute of Geology and Paleontology. “It’s very rare to find some sea animals in amber.”

Researchers suspect that this resin came from a tree on the shoreline, and that it picked up a discarded ammonite shell and other flotsam as it tumbled into the sand. The fossil also contains other aquatic life—marine snails and relatives of today’s pillbugs—as well as denizens of the coastal forest’s leaf litter, including mites, flies, beetles, a spider, a parasitic wasp, a millipede, and a cockroach.

“This extraordinary assemblage, a true and beautiful snapshot of a beach in the Cretaceous, is just mind-blowing,” says Jann Vendetti, a paleontologist at the Natural History Museum of Los Angeles County who wasn’t involved with the study. While the ammonite is perhaps the most visibly startling find, the real treasure may be having such diversity of life in a single sample from this time period.

“The idea that there’s a whole community of organisms in association—that may prove more important in the long run,” adds study coauthor David Dilcher, a paleontologist and emeritus professor at Indiana University Bloomington.

Shell of a find

The study is the latest to shed light on the ammonites, a group of shelled mollusks that lived during the age of dinosaurs, with roots going back to more than 400 million years ago. The group died out 66 million years ago alongside the nonavian dinosaurs, but by that time, they had achieved global distribution and had become dazzlingly diverse. Like their modern mollusk cousins, ammonite species probably adapted to living at many depths—and came in many sizes. Some stayed just a fraction of an inch wide, while other kraken-like giants grew to more than eight feet across.

If you had goggles, flippers, and a time machine, you’d likely see ammonites everywhere in Cretaceous waters, bobbing through ancient coral reefs alongside fish and marine reptiles, such as the dolphin-like ichthyosaurs and large mosasaurs.

“If you were scuba-diving in a shallow marine setting, you absolutely would have seen ammonites,” says Jocelyn Sessa, a paleontologist at Drexel University who specializes in fossil mollusks. “They would be as common as seeing some snails crawling around.” 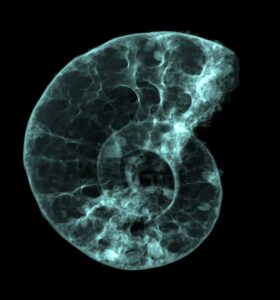 Based on its internal shell structure, the amber-encased ammonite is a juvenile that belongs to the subgenus Puzosia (Bhimaites), which makes a lot of sense in 99-million-year-old amber, Wang says. The subgenus first emerged more than a hundred million years ago and lived until at least 93 million years ago; scientists can even use the presence of its fossils to help estimate the age of marine sediments.

But despite centuries of research, many mysteries still surround ammonites. For one, there are precious few ammonite fossils that preserve traces of their soft tissue, making it difficult to reconstruct their bodies. Now that we know their discarded shells can fossilize in amber, researchers may be able to hold out hope for an even unlikelier find: a freshly washed-up ammonite, stuck in resin and preserved for the ages.

“Oh my gosh—I probably would say that I don’t know how that would happen, because amber is from trees. How is that going to get into a marine environment to entomb a living, moving cephalopod? But I don’t know!,” Vendetti says. “This paper forces paleontologists to maybe open our minds to the possibility of fossilizations that we didn’t expect, right? They’re rare, but time is long—and in that sense, rare things happen all the time.”

It belongs in a museum

The discovery is just the latest eye-popping find to come from northern Myanmar’s Hukawng Valley, which has been mined for amber for at least two thousand years. In the last decade, the valley has transformed into a paleontological oasis, as scientists have found feathered dinosaur tails as well as entire baby birds and snakes trapped in its amber.

But working with Burmese amber is difficult, if not dangerous. The mines are located in Myanmar’s Kachin state, which for decades has seen war between the country’s government and the Kachin Independence Organization. This group is fighting for the independence of the local Kachin ethnic minority, and the rebels rely on the area’s resources, including the amber mines of Hukawng Valley, for funding.

Many scientifically valuable amber specimens come to light only because of private trade, after the fossils have already been cut and polished. Researchers either ply Myanmar’s amber markets themselves, or scientists work with private amber collectors—as was the case with the newly described ammonite.

When the fossil was found, local dealers thought the ammonite shell was just a large snail, Wang says. His friend Huabao Dong, an amber dealer, tried selling the fossil to many collectors, but he had little luck because of its large size and apparent lack of novelty. Then, Shanghai-based amber collector Fangyuan Xia saw a picture of the fossil and realized it might contain an ammonite. Xia promptly bought it for the Lingpoge Amber Museum, a private museum in Shanghai that he directs.

“He didn’t care about the price, it didn’t matter,” Wang says. “If it was an ammonite, he would be happy.”

Xia is deeply involved in both the collection and study of amber: He has collaborated with Wang for years, and he has coauthored several scientific papers on amber fossils, including the new PNAS study. In 2018, researchers including Wang named a fossil insect genus after him. Xia makes his museum’s fossils available to other paleontologists, but at present, the Lingpoge Amber Museum doesn’t have a large public presence. Outside researchers must ask Wang or Xia directly to see his fossils.

Lida Xing, a paleontologist at the China University of Geosciences, Beijing, who specializes in Burmese amber, says that the rise of private Chinese amber museums is a fascinating—if complicated—trend. After all, the rarest and most interesting amber samples will be so expensive that they are beyond the budget of some research institutions, he says.

“At the same time, some collectors also hope that they can save these specimens,” he says in an email. “The development of private museums in China is fast, but there is still a lot of room to improve.”

Wang says that more finds are on the way—including more ammonites in amber. Last week, an acquaintance of his showed him pictures of a second ammonite in Burmese amber. He adds that Xia’s collection and other private museums hold other scientifically invaluable finds, which are working their way into publication.