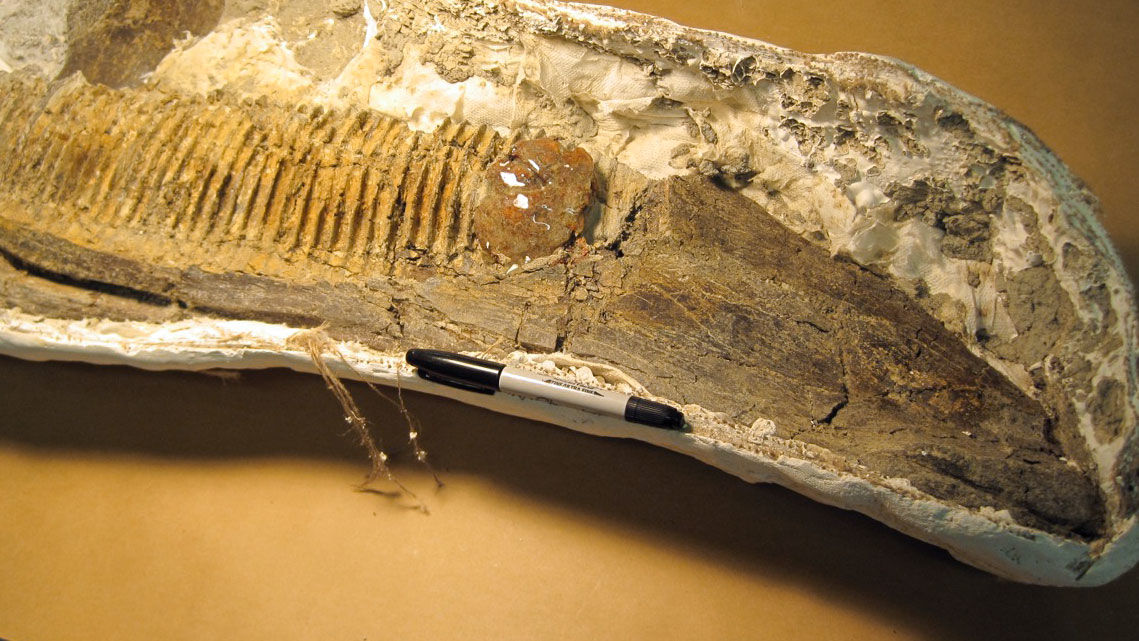 ‘Remarkable’ fossil features an insect trapped in amber, stuck to a dinosaur jaw

It isn’t every day that scientists dig up a dinosaur jaw—or unearth the remains of fossilized insects. So paleontologists couldn’t believe their luck when, in 2010, they found the 75-million-year-old jawbone of a duck-billed hadrosaur in Dinosaur Provincial Park in Canada’s Alberta province, topped with a 7-centimeter-wide blob of amber containing traces of trees and sap-sucking aphids (above).

The “remarkable” two-for-one fossil would have been preserved in an incredibly unlikely chain of events, the researchers write today in Scientific Reports. The paleontologists believe that after the Prosaurolophus hadrosaur died—and the flesh had decayed off its jawbone—it washed into a river. There, a blob of sticky resin from either a redwood or an araucarian conifer tree also fell. The blob, containing an unlucky aphid, washed up against the bone and was pressed against it by the flow of water, the scientists argue. It was then covered in sediment for tens of millions of years, during which time the resin hardened into amber.

The find—the first of its kind in North America—carries a cargo of secrets about the dinosaur’s environment. For example, the plant and insect traces inside confirm what many paleontologists already hypothesized: Some hadrosaurs, including the 9-meter-long Prosaurolophus, fed on conifers near coastal floodplains.